We made Euthylone as we believe this is the best stimulant right now. The effect is comparable to a highly energetic version of cocaine with a touch of 4mmc. It works mainly on dopamine and a bit on serotonin and has hardly any norepinephrine activity, which makes stimulation less stressful than other cathinones, yet the mental stimulation is very strong. 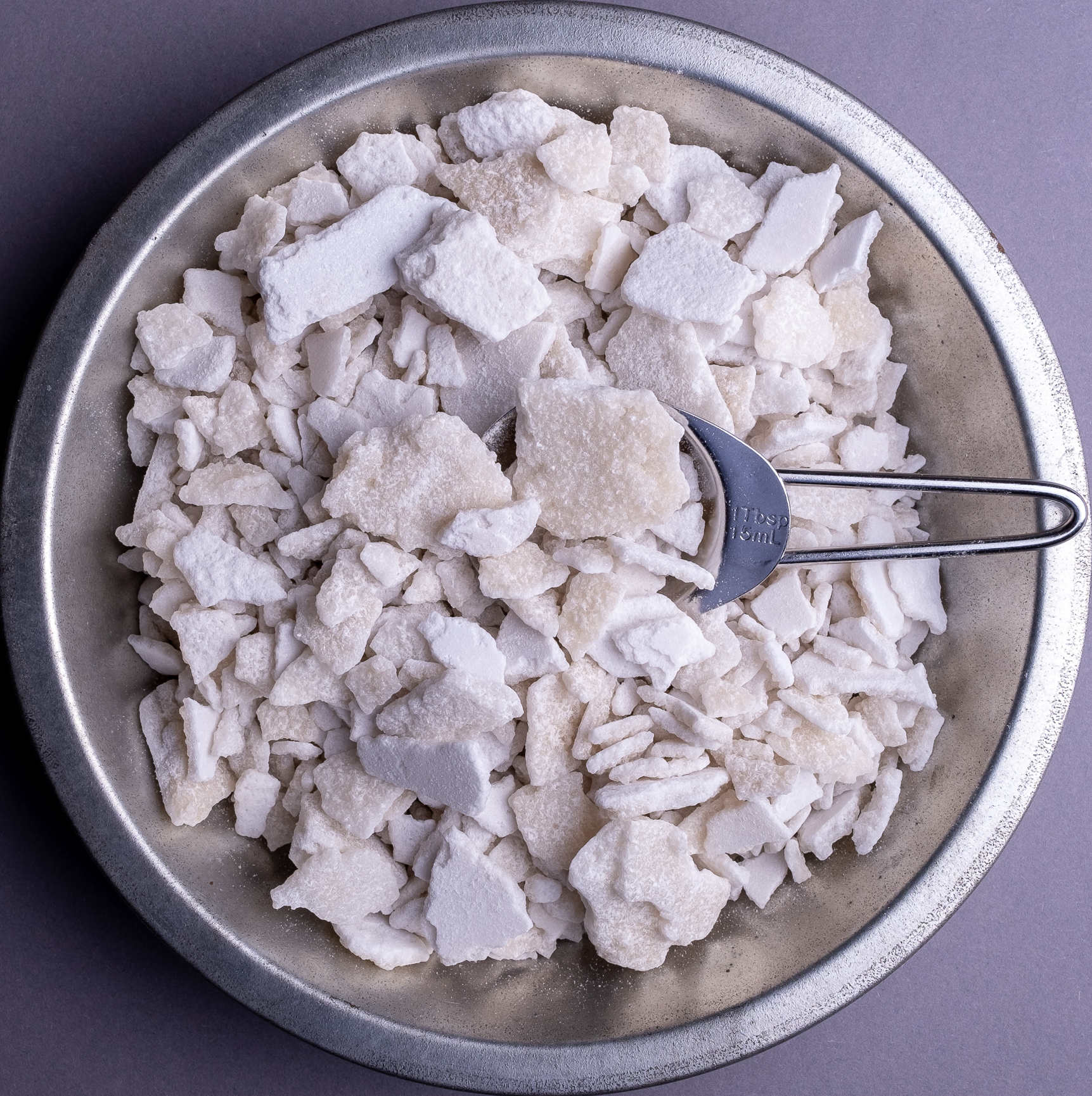 Eutylone (bk-EBDB) is a methylone analog that possesses ethyl groups at the α-carbon and amine positions. Reuptake inhibition properties are as follows: DAT: 281nM > SERT 640nM > NE 700nM. Monoamine transporter studies showed that effects at DAT being 10-fold more potent than the effects at NET. It also has relatively robust releasing capabilities.
Treatment with eutylone resulted in stimulation of locomotor activity of male Swiss-Webster mice following intraperitoneal administration of 1 to 25 mg/kg. The stimulant effects of eutylone occurred within 10 minutes following administration of eutylone and lasted for 70 min.
In drug discrimination studies performed in animals, eutylone fully substituted the discriminative stimulus effects of methamphetamine, suggesting its potential for abuse.

Information published in online forums suggests that the effect is dose-dependent:
50mg ... like Ritalin
100mg ... like coke, but it takes a whole hour for the effect to kick in
150mg ... a bit of 4MMC-like high comes into play
over 200mg ... we've read reports that the mental stimulation here gets so intense that users report mixing it with a downer, like alcohol or benzodiazepines.

Euthylone has been explored for use in pharmacological formulations by Boehringer Sohn AG and Co KG Boehringer Ingelheim GmbH in 1967.

Very light mental stimulation, with a very faint warmth in the body. Smooth, and subtle.

I got around to testing a more recreational dosage just two days ago. I reached a total dosage of 200 mg over the course of 3 hours.

I began by weighing out 150 mg bk-EBDB and crushed it to a fine powder.

T+0:15: Slight mood boost, with gentle tingles of warmth in the body. I also feel more aware of my surroundings. Very subtle so far.

T+0:25: The effects of the Eutylone seemed to have reached a peak. Definitely feels a tad serotonergic. Subtle, warm tingles throughout the body.

T+0:45: So far, Eutylone seems to be rather gentle and calm. No intense physical stimulation to be found at a 50 mg dosage. The most prominent effects would be a slight tingling warmth, gently flowing through the body. Mentally, I feel slightly more aware of my surroundings, and I'm generally feeling a bit uplifted.

T+ 1:15: ~50 mg administered intranasally. Still not much discomfort noted with this route of administration.

T+1:35: Feeling the effects of the second dose ramp up. More warm, but subtle tingling in my body. Heart rate seems to be a bit... Different. My heart rate does not seem to have increased or decreased, although, I can feel it beating more prominently, if that makes any sense. I know the feeling of high blood pressure all too well, and the feeling I'm having in my chest is similar, yet dissimilar to the feeling of increased blood pressure.

T+2:00: ~50 mg insufflated. Hoping to ramp up the effects to a fully recreational spectrum.

T+2:25: Effects are definitely very noticeable now. Eutylone feels very smooth and very subtle. There is definitely something going on, something serotonergic. Eutylone doesn't seem to punch you into an altered consciousness immediately like some other cathinone do. Tingling warmth very noticeable, yet not intense. Slight change in vision noted... Feeling more aware of surroundings.

T+3:00: Weighed, crushed and insufflated a final 50 mg dose. This brings the total dosage of this experience to 200 mg.

T+3:30: Effects have reached their peak, and the profile of Eutylone seems to be a fair bit clearer to me. Definitely feels serotonergic. Warm bodily sensations and an uplifted mood. Slightly more creative thinking, with more focus applied to tasks at hand.

T+4:00: Effects are at a steady plateau. Warm but subtle tingles in the body. Slight shift in mentality. Generally positive mood boost. No changes in appetite. Ate a banana and a small salad with no issues. The stimulation feels more cerebral than anything. No physical jitters or shakes. Heart beat feels a bit more pronounced, but heart rate is not elevated.

T+5:00: Effects are very subtle. If you weren't focused on them, they might not be entirely noticeable, especially if you're occupied with tasks.

T+6:00: Effects seem to be tapering off. Very gradual decline back to baseline, with no obvious comedown noted.

T+7:00: Feel almost sedated at this point in time. I do not feel drained of energy, although, falling asleep does not seem to be a difficult challenge.

Generally, eutylone seems to provide a positive boost to your mood, and seems to increase overall focus on simplistic tasks.
I'm excited to try bk-EBDB in one large oral dose of 125 mg, as I am sure this dosage would pack more of a punch when ingested all at once, rather than gradually over a couple hours.

If you swallow a decent dose at say 100mg to 150mg(be careful) at the beginning, it's not subtle at all and I would say it's rather intense. Insuffulation is not a great way to do this one.

Been going on mini binges off and on for a couple of weeks now. Roa is IV. The rush is fantastic, and I used to iv meth daily, for years. I haven't gone over 60mg yet, and honestly I don't think I will. Seems to be working fine at the lower mgs so no need to push it. Now, I do redose several times throughout the binges, albeit at lower mgs than 60, Usually around 30. I'm actually glad that it is almost gone because I don't have the capacity to stop for more than a day or two. Thanks for your time and the nice Post sub. I'm going to go do that now....

I Recently IVd appx 300mg of brown eutylone and holy mutha that was the most wild stimulant I've ever tried. Better than iv 80 percent coke and better experience than iv afghan heroine although different given the fact eutylone is a stim.

Effects were within 3 seconds blurred vision and ringing ears and noticeably elevated heart rate. What followed was something I've never felt before, and intense pulsating rush throughout my entire body. Definitely not functional this dosage and if you try this make sure your comfortable in a relaxing spot like a lazy boy cause the rush in my case was long lasting probably 45minutes to one hour before your back down to earth on a coke like high and 4 hours after administration it's pretty weak at that point. FYI I don't recommend that dose, probably not far off from lethal but makes for a sweet experience if you survive. 😉 I'm interested to see if anyone has experienced this. Wasn't expecting to try this substance via IV and first tried smoking the stuff unsuccessfully tasted like toilet bowl cleaner then snorting it to find it burned with little effect. If comparing eutylone to high quality uncut cocaine on a 10 scale I would put it at a 20. Too bad it had to be I'vd, I prefer smoking for a roa.

Indeed, I spent a good 30 minutes focused on breathing as the euphoric rush pulsated through every fiber of my being.

the experience that I was left with was off the charts .

very long and good report from rcbalkan, here only excerpts:

Overall euthylone(bk-EBDB) has a very subtle stimulant high with a hint of euphoria/relaxation of the body, its not in your face drug like 3mmc/4mmc/meth but like methylone/buthylone-light. Would reccomend to try it anyway but the comedown when snorting is harsher than oral must say. My gf parachuted 125mg, despite that, she was still able to learn for the test next day, comedown noticable but almost non exsistent at that dose she said. She passed the test anyway soo yeah. It could be a functional stimulant at low doses maybe, need to try it few more times to see where it could get me.

Stimulation is very mentaI, light happy relaxed tingling filing over the body. I dont want to push the dose soo i try another bump at 50mg and go to the store for groceries. Visualy everything seems a bit brighter, even though its a rainy day, i feel like the sun is shining outside and have had very nice conversations with store clerk and people. Socializing was very easy soo i would find it to be good for a private party setting where you need to act/look sober but still wanna be mdma/light speed/coke high and not look fucked in your face kinda high. Anyway im babbling soo i see the drug has taken effect/jaw clenching is minimal and heartbeat feels up a bit but nothing to worry about yet.

I gave Euthylone a shot two days ago. After snorting a couple of considerable lines I experienced a pleasant rush, comparable with what I might sense by taking a non so potent dose of MDMA and a tiny line of amphetamine. Less in your face than a regular dose of the latter. However, as soon as I started redosing I quickly experienced a huge increase in sexual appetite, and not being slightly satisfied after a YouPorn session which usually does the trick when using GHB, cocaine or amphetamines. I spent hours looking for an available sex worker, and I couldn't care for anything else.

Upon my return to my home base I had an unusual desire to redose, and even told my employer, who I highly appreciate, that I couldn't work later that day - using the disgraceful excuse that my (alive and kicking) grandmother passed away. My priority was to redose as long as possible, making electronic music without caring to drink, eat or even move. Hyperfocus all the way.